Almost…she almost made it to her 4th Year Ampuversary.  3 Years, 7 Months and 24 Days…

October 20th was her ampuversary date.  I remember when I first started her blog in December 2009, I was so paranoid about starting it, fearing it would jinx her and she wouldn’t be long on this Earth after amputation.

I once asked how long Maggie would have after amputation and I was told probably a year…well, she beat that all to hell, didn’t she!  Just couldn’t beat the kidney failure.

I want to share some video’s I may not have ever shared before.  To help those in their journey as a tripawd.  The good, the bad and everything in between.

It took from May 2009 to October 2009 to figure out exactly what was wrong.  The guess on what was wrong went from ACL injury, to psoas injury to finally cancer.

Vet #1:  diagnosed her as an ACL injury and suggested TPLO surgery.  Maggie was not put to sleep to check her knee, which I have learned since then, the dog can guard with their muscles holding the knee in place, so the dog really needs to be put to sleep to get a better diagosis on the knee vs. just watching her move and trying to get a “drawer sign” in her knee by palpation while she’s awake.  Her lameness was just a slight weight shift from the left to right side in the rear.

Vet #2: didn’t feel it was her knee but her psoas muscle that was the issue(groin).  Maggie got massage, acupuncture and chiropractic adjustment.  She improved DRAMATICALLY after this session.  After the good effects of that session wore off, I can’t recall the amount of time, might have been a month,  I had her worked on again by this same vet but the results weren’t as good the second time.

As many are aware, my sister Gina Snow, is a Vet Tech, and so she was my coach through all of this.  She, too, didn’t feel it was an ACL tear, agreeing with Vet #2. But as a “just in case mode”, I put her on conservative management(leash walks only) for 8 weeks.  If it were an ACL injury, there would be an improvement.  There was no improvement.  She got more and more lame.  No noticeable lumps or bumps on that leg just more lame as time went on.

Vet #3:  This vet put Maggie under to do the “drawer test” on her knee as he couldn’t get any real movement in her knee either that would prove it to be an ACL tear.  When she was asleep, her pain was so severe she was crying out as he manipulated her knee ASLEEP.  He aspirated her knee.  That result showed “old bloody fluid”.  So this vet, too, then bounced on the ACL injury wagon.  When I asked him if he would do the surgery, he said no because he said to me he was afraid what he’d find in there.  In hindsight, he knew, in my opinion, it wasn’t an ACL but more severe things going on.

Vet #4:  By this time, Maggie’s knee was diffusely swollen.  I was prepared before even seeing this vet to the fact that Maggie’s leg would most likely be amputated due to the fact my sister, diagnosed Maggie as having soft tissue cancer.  I failed to state earlier that Gina did x-ray Maggie, thinking she might have OSA.  There were no signs of bone cancer.  The signs all led to soft tissue sarcoma, according to Gina.  She was right.  Dr. Chris Miles did a biopsy and it came back as STS.  10 days later, we amputated her leg.

By the time September rolled around, she was really lame and showing muscle loss as shown in this video:

just a little “happy” of Maggie finding a tug toy.  Even though she was in a lot of pain due to her leg, she still wanted to play:

This video was just after her biopsy.  Her knee swelled up bad after the biopsy.  Soft tissue sarcoma was the diagnosis.  I slept on the futon laid flat with her as that was where she wanted to be.  She was on Gabapentin for pain and Tramadol.  Also, after her biopsy, she had a pain patch:

It wasn’t an easy road for us at the beginning.  But I found out after joining the “tripawd family” that most others have the same 2 week recovery from Hell.

This video might be disturbing to some people, as Maggie was just out of surgery and home for 4 days.  Talk about a ‘trying’ time.  Watching this brings back all those horrible 2 weeks from HELL in her recovery…but we got through it!

Two weeks later, Maggie finally was Maggie again!  I had to put music over my voice on this video as I was crying so much(happy tears).  She is laying actually where she is buried now under those pine trees….

I had thought a ramp into the house was a temporary thing but she used that the entire time…never was strong enough to do a lot of stairs.  Throw rugs on the hardwood floors were also down the entire time…she was very leary of slippery surfaces.  A “must have” piece of equipment with a tripawd is the Ruffwear harness – very helpful in steadying her and helping her up/down stairs when there were no ramps or on slippery floors.

In 2010, I started her PT work that was so necessary for any tripawd, in my opinion.

These video’s we made for blogs for the website:

Maggie was an agility dog prior to being amputated…so it was nice to let her do those things again, in a lower scale for her:

This video was about a month later from amputation….my happy girl!

and Barney came to Maine to visit from Maggie the Pug in California!

We will miss Maggie’s trail clearing skills!  She was a great trail groomer:

Winter was a pain in the butt with her being a tripawd…ICE! 🙁

I had waited for years for APDT Rally to come our way.  Unfortunately, it never came until Maggie was a tripawd.  She earned all three levels of APDT Rally titles and her Veterans title as a tripawd!  Sits were the hardest for her…she’d “run out of sits” toward the end of a course.  But what a trooper she was!

Maggie’s ‘boyfriend’ was Woodie.  Every once in a while I’d take her for a walk with him.

Yes, are you seeing a trend?  Maggie had a “thing” for sticks 🙂

and yes, she did do a little bit of agility now and then:

One of the biggest bummers about Maggie being a tripawd was the fact she could no longer go on long walks.  They were extremely short.  I’d say her longest walk was probably a mile.

So I got her a DoggyRide cart but she was NOT impressed with that!  She’d rather walk on her own three feet, thank you very much!  Plus, it really was too small for her, even though I got the largest one available.

Maggie was a very good “singer”…

Another one that makes me smile…

And Maggie competed in Wag It Games…it was sooo perfect for her being in the Heart Dog Program(for disabled dogs) – this was Independent Skills class:

This was Maggie’s first time back in the kayak as a tripawd…she was spectacular as always!  Note she is wearing her “Super Star collar”(that will make sense later in this blog)

This was Maggie’s 1st attempt at being on the BOSU domes!  My “agilecowdog” displaying her agileness!  I worked her on these and other PT items at least three days a week:

Yep!  Tripawds can roll over! 🙂

Winter 2012 – still showing that she is pretty strong at 12 years old!

Another one that makes me smile…she was still feeling her oats in October 2012:

Maggie in Novice Sniff It in Wag It Games.  This was to be her last trial.  She LOVED Sniff It:

Maggie’s 13th birthday…little did I know the kidney failure was looming in her…soon to be diagnosed in March:

Mid August 2013.  Maggie’s kidney failure was progressing and had been all summer.  Her last blood value check I did was the first part of June and her creatinine number was at 5.4 then.  That put her in severe renal failure category.  I never did any more blood work on her after June.  There was no sense in it – just depressing numbers to look at.  The only thing that kept her going was daily subQ fluids and the Prednisone to keep her eating.  On this video, after I stopped recording, she wanted back in the Jeep.  Just too weak to want to walk farther.  Such a trooper:

This bracelet was made by Rene at tripawds.com.  It’s beautiful!  Notice the Super Star Maggie charm – with stars on the back like her collar in the video of her in the kayak.  The center charm Gina gave me on the day we put Maggie to rest.  Rene made the bracelet to match and fit Gina’s charm in the center.  I love this bracelet: 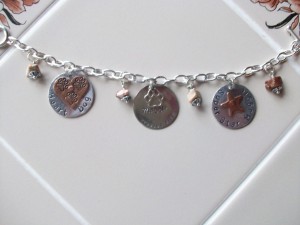 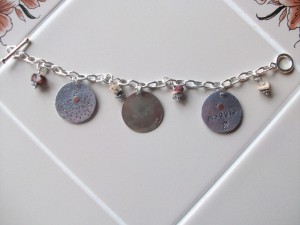 I hope this blog post shows there is life for a tripawd after amputation.  It is, of course, changed to suit the dog’s needs.  Some tripawds can go on much longer walks, for instance.  Maggie couldn’t.  It’s all case by case, in my opinion.  It’s a “crap shoot” when you decide to amputate.  How long will my dog survive afterwards?  Well, we have no crystal ball to tell us, unfortunately.  But I went with my “gut instinct” in that I knew Maggie had much more life to live!  I hope this blog helps others, as it helps me, even now after Maggie is gone…to heal from my grief of loosing her.

So there is Maggie’s 3 years, 7 months and 24 days as a tripawd in a nutshell.  She had a good life…a GRAND life for a GRAND dog! 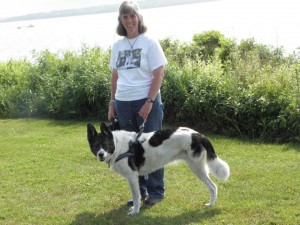 Do not stand at my grave and weep.

I am not there. I do not sleep.

I am a thousand winds that blow.

I am the diamond glints on the snow.

I am the sunlight on ripened grain.

I am the gentle autumn rain.

When you awaken in the morning’s hush,

I am the swift uplifting rush

Of quiet birds in circling flight.

I am the soft star that shines at night.

I am in the flowers that bloom.

I am in a quiet room.

Do not stand at my grave and cry.

I am not there. I did not die. 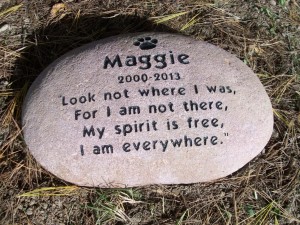 To remove ads from your site and others, upgrade to a Tripawds Supporter blog!