From constant rain and cool temperatures to now high 80’s and humid and Maggie is NOT impressed with the heat. Never has liked it but really hard on her now. I haven’t done any recent blood work on her – there really isn’t much point in doing any more IMO. I’m doing the best that I can for her: daily subQ fluids, low phosphorus foods – eating three times a day to keep phosphorus levels as low as I can get them. She’s eating more now than she has most of her adult life. I may increase it more…she’s eating about a cup more food now since kidney disease. It’s hard work being sick. Even though she is basically getting no exercise but to go out to the bathroom and putter around now and again, she still needs more food. I’m still giving her a multitude of supplements for her kidneys: Renal Advanced Powder(replaced Azodyl), Epakitin, Standard Process Renafood, Cataplex B and Catalyn, GreenMin, ground eggshell and also the ole’ faithful, that keeps her eating – PREDNISONE. I’d say Maggie’s highlights in a day ARE eating. A lot of kidney dogs can’t say the same, sad to say 🙁 I know Pred. is hard on her kidneys but if it weren’t for that, she wouldn’t be here now for me to write this. Since shortly after her CRF diagnosis, I stopped giving her the daily homeopathic remedies for her cancer, after having been giving them daily since December 2009. Now, she is on a daily remedy, Calcarea Carbonica 200C and three cell salts – Nat Mur, Bioplasma and Calc. Phos. These are all for the CRF diagnosis & have helped her(for instance, she rarely has shiver ‘fits’ which are related to the disease). Here’s a few photo’s and video’s I’ve taken today and last weekend… She is really weak so when you see her looking really spry in a video, it’s because she is driven by FOOD – otherwise, she lays around A LOT….especially due to this heat. She doesn’t have much gumption to motor along for very far. I did take her for a walk the other night…probably 100 feet in one direction and then turned around(she didn’t want to) but on the way back had to take a bit of break as she was loosing strength in her rear leg to keep going.. 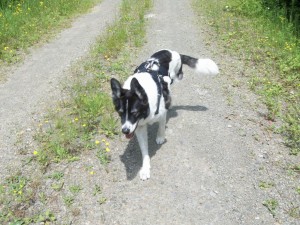 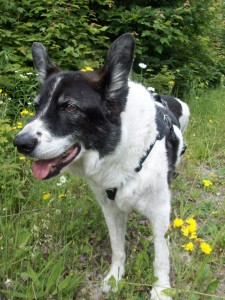 We went to Fish Lake for a kayak but Maggie is just too weak to get her into the kayak. I’m sure she’d lay there just fine but what if I tipped over and she went in the water? I don’t have a life preserver for her, so decided it wasn’t a good idea to chance it.

Thought I would add this video on to this blog so I can show you a clearer view of Maggie’s health as it is now. As I said, she is very weak and this shows it in 32 seconds…

And this is her just a little bit later moving better waiting for her hot dog!…

and a couple photo’s from today: 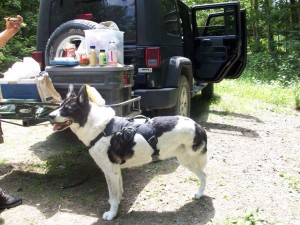 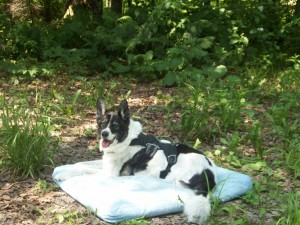 When back at home, she was determined to do a few Wag It Games obstacles for TREATS! So she willingly did a send out to a jump(the bar set at 4″), did two hoops(ground level) and did the Bang It board tipping with front feet. She was doing so great but it sure didn’t last long – she was getting weak in the hind end and I could see her front leg quiver some too. 🙁 And I had thought about video taping her but canned that idea after that – time to rest Maggie…

To say that Maggie is strong willed in MIND is an understatement! Her body, however, is just really showing its toll 🙁

‘Til next time, Maggie keeps on hoppin’….


To remove ads from your site and others, upgrade to a Tripawds Supporter blog!